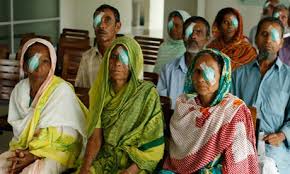 Bangladesh is a developing country with an area of 147,570 sq. kilometers. The estimated population in 2001 was 123.1 million with an annual growth rate of 1.47% (Statistical Pocketbook 2002, BBS); and 77% of the population live in rural areas. Per capita Gross National Income (GNI) in the year 2002 was US$ 380, and 36% of the population lived below the poverty line (World Bank, World Development Report 2004; World Development Indicators).  Agriculture sector provides employment to 63% of the country’s workforce. The literacy rate among adults (15+ years) is 51% (BBS Statistical year Book 2002).

The health status of the people has been steadily improving as evidenced from various indicators. The Life Expectancy at birth was estimated to be 61.71 years in January 2004 (CIA World Fact book). The estimated under-five mortality rate in 2002 was 73 per 1000 live births (UNICEF website).  The government is a major provider of health care in the country along with NGO and private providers.  Health care in government facilities are provided free of cost.  The per capita annual government expenditure on health and family planning was about US$ 3 while the overall health expenditure per capita was US$ 12 as estimated in 2001 (World Bank, World Development Indicators 2004).

The Government of Bangladesh has identified blindness as a critical social and health problem and demonstrated its commitment by forming a national apex body entitled Bangladesh National Council for the Blind (BNCB) in 1978 with a mandate to formulate, facilitate and monitor the national plan of action to prevent and control blindness.  Besides, the Government of Bangladesh has ratified the Vision 2020 program; and while chairing the 56th session of World Health Assembly in May 2003, the honorable Health Minister of Bangladesh reiterated commitment for achieving vision 2020 goals within the stipulated time.

Bangladesh was one of the first few countries to have a national program for prevention of blindness. The Directorate of Health Services in collaboration with BNCB developed and launched first National Program for Prevention of Visual Impairment and Blindness in Bangladesh in the year 1980.  This program was based on eye camp strategy in order to work within limited resources available during the time.  Consequent to the paradigm shift in early 1990s that discouraged eye camps, and launched Vision 2020 in 2000, eye care program strategies in Bangladesh were changed and directed towards sustainable development approaches.

It is in this context BNCB has taken the initiative in response to the decision taken in BNCB full committee meeting chaired by the Health Minister, to review and update the National Eye Care Plan to incorporate in the ongoing Health Care program of the government. Accordingly a National Eye Care Plan Review Sub-Committee of BNCB was formed with selected members.  As a methodology, the sub-committee undertook review and research of the existing plan, programs and literature, sought views of stakeholders, and prepared this draft which was widely shared and consulted with cross section of professionals and people including the clients in all the divisions; and finally all the inputs will be synthesized in the national plan through a national level workshop.

National Plan of Action on Eye Care would be based on the eye care needs of population. Plan would focus on human resource development, infrastructure and technology, strategies for control of major blinding eye diseases. Advocacy, resource mobilization, community participation; and continuous monitoring of the implementation of the plan through a coordinated mechanism would also be key elements of the national plan.

In a developing country like Bangladesh prevalence of blindness puts an additional burden to our socioeconomic conditions. According to The Bangladesh National Blindness and Low Vision Survey 2000, the age standardized blindness prevalence rate is 1.53% and thus, there are approximately 675,000 blind adult (30 and above age group) in the country (586,880 to 784,000)

The same survey revealed that blindness and low vision (LV) were found to be associated with ageing as both degrees of visual impairment were common among elderly persons, in women as compared with men (1.72% v 1.06% blindness prevalence), in illiterate persons, and, in males, among those who were manual workers when compared with non-manual employees. The study also found that bilateral blindness prevalence was highest in Divisions of Barisal (2.28%) and Khulna (1.97%), lower in Chittagong (1.43%), Sylhet (1.31%) and Rajshahi (1.21%) and lowest in Dhaka division (1.13%).

One of the striking findings of the study was the number of uncorrected aphakes, with one quarter of intra-capsular cataract extraction eyes not being corrected with a spectacle lens. The imbalance of distribution of refractive rehabilitation was also evidenced by the findings that women, eye camp surgeries, illiterate subjects and rural dwellers were less likely to wear aphakic spectacles. The study emphasized the need for greater quality and quantity of cataract surgery, with strategies targeted at improving operative technique and particularly at ensuring effective post-operative rehabilitation.

Despite a substantial reduction in the fertility rate in Bangladesh in recent years, overall population growth continues to rise. As such there will be an estimated 175 million people in Bangladesh by the year 2020, with more than half of the population being over the age of 30 years, and one-fifth (34 million) being 50 years of age and older. The survey recommended organizing eye care service delivery in Bangladesh in near future, focusing principally on cataract surgical and refractive error correction services. The recommendation is consistent with the prioritized areas of action for the region as outlined by WHO South East Asia policy document “Vision 2020 – The Right to Sight”.

Using the WHO global estimate of Childhood blindness prevalence2 of 0.75/1,000 children, there are about 40,000 blind children in Bangladesh. Childhood cataract is the leading cause of childhood blindness in Bangladesh and over 12,000 children3 are suffering from unnecessary blindness due to un-operated cataract and in need of surgical care from well-developed eye care facilities. Another 10,000 children3 are blind due to corneal scarring which could have been entirely prevented through effective primary health care and primary eye care services in the community.  For every million population in Bangladesh, there would be 300 blind children. About a third of them (100 children) are blind from cataract. The provision of between 100 (uni-ocular surgery) to 200 bilateral cataract surgeries per million populations would be needed to restore vision in these children. Community based preventive measures will be required to prevent 25% of all childhood blindness, which is related to Vitamin A Deficiency disorders, diarrheal diseases, malnutrition and measles. Childhood cataract is a major treatable cause of childhood blindness that can benefit from future intervention strategies in line with the priorities set by the WHO’s Vision 2020.

In Bangladesh, assuming a prevalence of 4% of children aged 5 to 15 years to have visual acuity of less than 6/18, it is estimated that there are approximately 1.3 million children having visual impairment due to refractive errors3, the large majority of which are amenable to correction.s

The government is the major provider of the health care in the country along with NGOs and private sector.  The per capita annual government expenditure on health and family welfare is less than US$3 (Bangladesh Taka 180, Household Expenditure Survey, 2001). The government health sector has a well-organized service delivery network that is extended down to the village level. The focus of the program in the rural areas is primary health care that included essential health and family planning services but does not include eye care.

According to the National Eye Care capacity Assessment conducted by National Institute of Ophthalmology (NIO), ORBIS International and Sight Savers International in 2003, the country presently has about 141 hospitals providing eye care services that include service provision or deemed to have potentials in terms of strategic location and infrastructure for developing eye care services. Of the total hospitals, 71 hospitals representing 50% are from the government, 56 representing 40% from the NGOs and 14 from the private sector representing 10%. The mentioned hospitals include 20 medical colleges, 55 government district hospitals, 53 NGO secondary eye hospitals and 8 private (for profit) hospitals/clinics and 5 tertiary hospitals. Two of the tertiary hospitals belong to the government and the remaining 3 are in NGO sector. Of the medical colleges, 14 are in the government and 6 in the private sector.

There are about 626 ophthalmologists and about 618 Mid Level Eye Care Personnel in the country. 70%of the all eye surgeries in Bangladesh4 are cataract surgeries. The productivity of ophthalmologists is affected by the limited availability of ophthalmic nurses and paramedics. There are only about 2,822 hospital beds4 available for eye patients in the entire country.  Facilities at all levels have inadequate ophthalmic equipment and supplies, and often, the existing equipment is non-operational due to inadequate maintenance procedures and/or lack of trained people who can repair ophthalmic equipment.

Eye care services are virtually non-existing at rural community level and upazila (sub-district) level.  Eye care is provided mostly in secondary level hospitals located in the district towns. However, the eye department of the district (government) general hospitals, in most cases, is not equipped with essential diagnostic and microsurgical equipment and adequate human resources. Recently, government has provided equipment for all district hospitals that include one set of slit lamp microscope, one set of ophthalmic operating microscope, one set of direct ophthalmoscope with spare bulb and 2 sets of instruments for cataract surgery. The government has also arranged for availability of either one senior or junior consultant (eye) for 54 district hospitals. Separate OT arrangement for eye surgeries also been made in these hospitals. So it is expected that all district hospitals from now onwards will be able to provide eye care services.

There are a few NGO eye hospitals and for-profit private eye clinics in some old / big district towns but they do not provide sub-specialty care. There are tertiary level government & NGO facilitiesonly in Dhaka & Chittagong which provides sub specialty eye care.  .  The NGO facilities charge a modest or subsidized fee for services. Thus their fee structures and charity motives allow some poor patients in seeking NGO services. Majority population cannot afford to pay for private services. District level services include refraction, cataract surgery, treatment of corneal ulcer, treatment of ocular injury and medical treatment of glaucoma. A large number of ophthalmologists are working in the larger tertiary level government & NGO facilities and a few NGO facilities in Dhaka & Chittagong. Services in tertiary facilities include all the district level services and surgical treatment of glaucoma and YAG laser treatment.

There are 4 eye hospitals in the country where a full-fledged pediatric ophthalmic unit has been established. Two eye hospitals have established corneal sub-specialty unit; and only two eye banks are functioning in limited scale.  Six vitreo retinal units exist in the country. The development of sub specialty in eye care is gradually picking up which need to be augmented both in Government and Non-Government sector.